How short activity and breather breaks can increase student performance

More than ever before, a large percentage of the population are being held hostage behind computer screens and other digital devices in the name of study and work. Working and studying from home has led to increased sitting and sedentary behaviours, reduced social interaction, reduced overall physical activity and declining mood states. Whilst most of us are aware that taking a break to grab a cup of tea or visit the fridge is a good way to get up off the chair, many of us aren’t aware of the additional benefit of taking intentional activity and deep breathing breaks.

So just how do short activity and breathing breaks at school and work benefit us? Here’s our top findings:

It has been long-held knowledge that we lose attention and concentration after long periods of sustained work or study. Studies have shown that sustained attention wains over time and attention vigilance declines over time, especially if the stimulus remains unchanged for a long period. Many of us have experienced this with our own academic study and report reading or writing. Most of us can relate to examples of spelling and grammar errors being overlooked, or an inability to see where something went wrong in a maths formula after working on such tasks for prolonged periods.

Lleras and Arega (1997) undertook research to explore what happens in the brain with prolonged cognitive work or study. He found that focusing on the same stimulus for prolonged periods made it seem invisible after a period. His study on the impact of taking short breaks over a 50min work interval found a positive association between regular short breaks and attention and focus. Those who took a regular, short activity or relaxation break had no attention decline and performed better.

The benefits apply to students of all ages. A study by Peiris in 2021 found that classroom movement breaks for university classes reduce sedentary behaviour and increase physical activity, alertness, concentration and enjoyment.

Even as far back as 1997, Henning performed a study on computer operators who would arguably have a similar work pattern to the modern-day worker and student. He found that short (3min) stretching breaks performed frequently through the day improved eye, leg, and foot comfort and led to improved productivity.

So, just what type of break is best for students in a classroom setting? Blasche’s study (2018) compared fun, higher intensity physical activity breaks with low intensity or breathing breaks and found that while both improved enjoyment and a sense of wellbeing, the higher intensity break took a longer recovery period for students to re-settle. Therefore, it’s important to choose the right type of break for the group of students or the individual student involved. Choosing a soothing stretch, yoga, pilates or breathing break could be the perfect fit for a classroom setting. However, to lift spirits and promote positivity, fun-filled energetic breaks could certainly play a positive role.

Health Breaks’ Healthy schools program provides teachers and students with the tools to select from a wide range of physical activity and breather breaks to suit any situation. Teachers can curate their own selection from the Playlists provided, according to their direct knowledge of the children’s personalities, moods, the task at hand, time constraints, the environment and so on. Students can benefit from the obvious short term effects on focus, attention and mood but can also learn life-long lessons. Students can learn to adopt the practice of taking regular self-care breaks for exercise, movement and deep breathing. This long term practice, taken into adulthood, can have profound benefits on reducing chronic disease risk, musculoskeletal injuries and improving mental wellbeing. 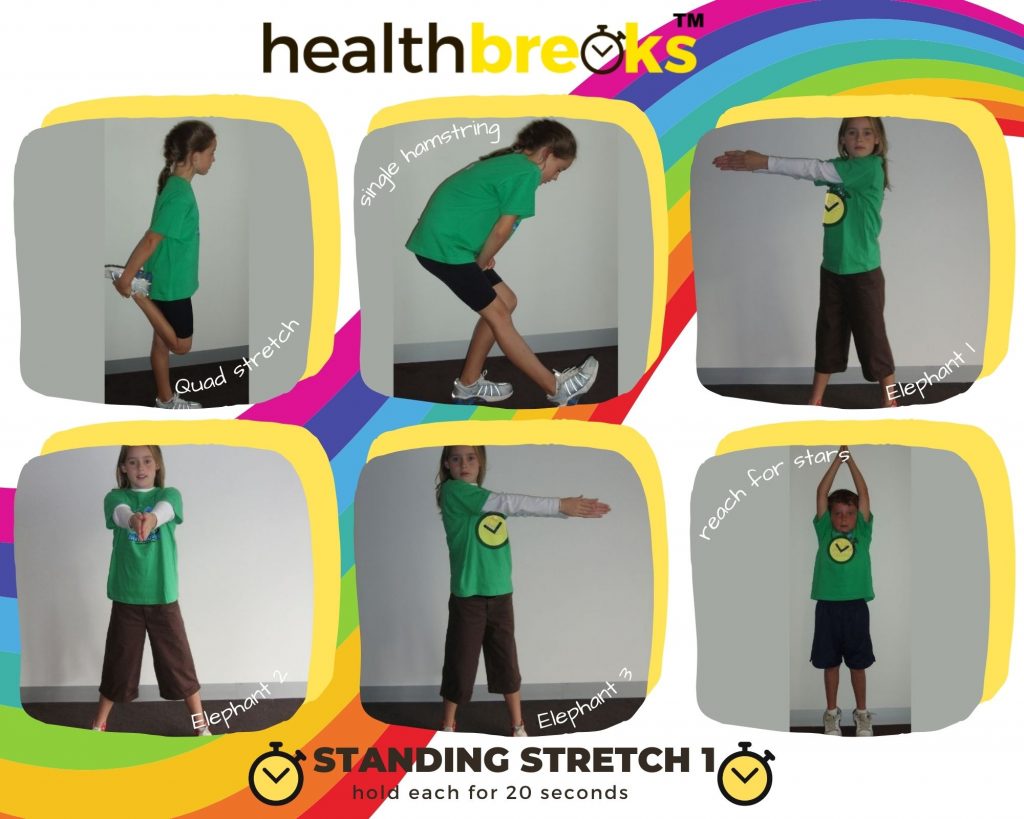